From the head to the hand. Go behind the scenes where the prominent Norwegian designer Andreas Engesvik reveals how he went about creating wallpaper patterns for Photowall.
by Photowall UK at 6.9.2017

It all started about two years ago. A meeting between a designer and a design manager. A designer who put Oslo’s design scene on the map and who, in most contexts, is called one of Norway’s leading designers. His name is Andreas Engesvik and he’s just about to launch the wallpaper collection, Manuscript, for Photowall. But if we go back a little, to somewhere between their first meeting and today, when Andreas’ design process began. 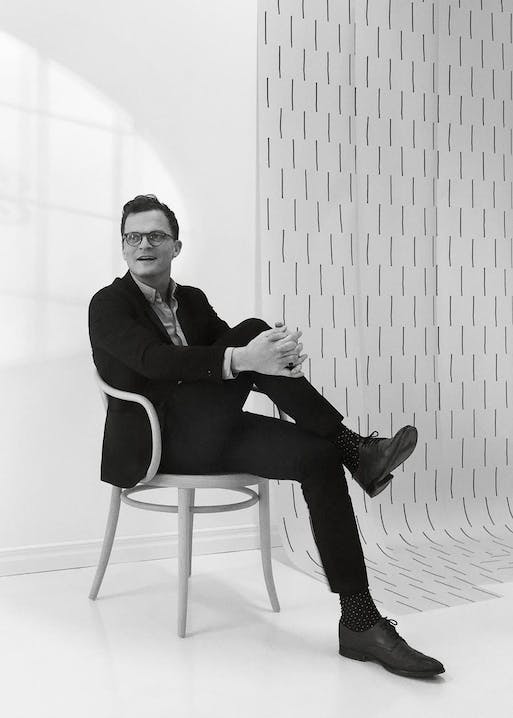 It simply started in my head. There, I thought and defined – what should I do? Then I gathered my thoughts which were independent from each other and that would hopefully have an impact on other people.

After collecting some thoughts it was time to start sketching. All Andreas had to keep in mind was that the motifs would work on the wall. But to create two-dimensional patterns turned out to be a little different from the three-dimensional Andreas was used to.

"It was hard. I thought it would be easy, but the two-dimensional process is very different from the three-dimensional one which I am used to working with. Here I review and consider the subtlety of simplicity," says Andreas Engesvik.

For this collection Andreas took inspiration from old techniques. It was a must for the presence of the hand to be seen. All motifs were painted by hand and will be printed digitally in Photowall’s studio in Skarpnäck, Stockhom. 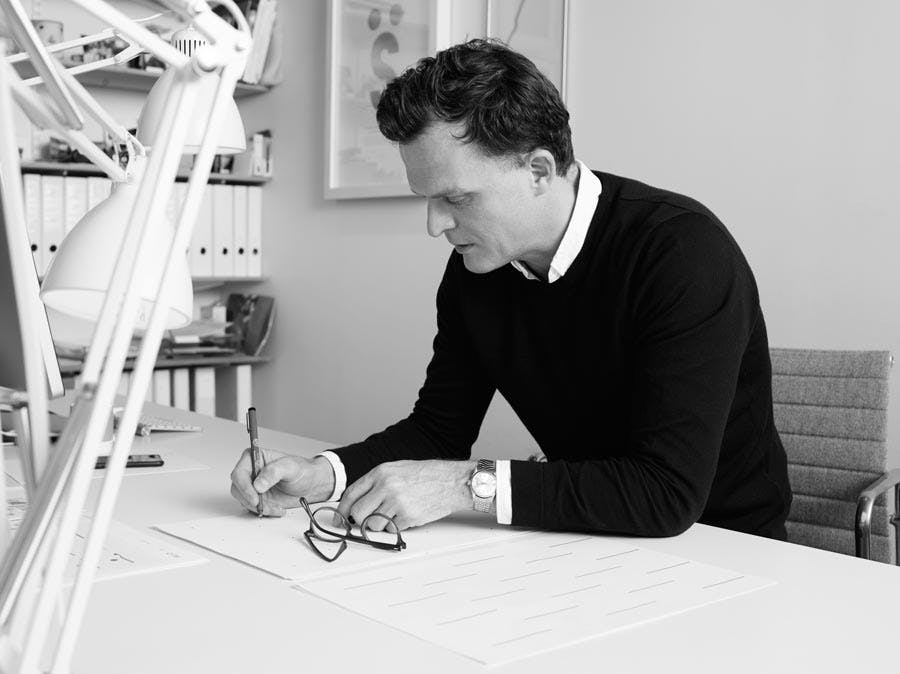 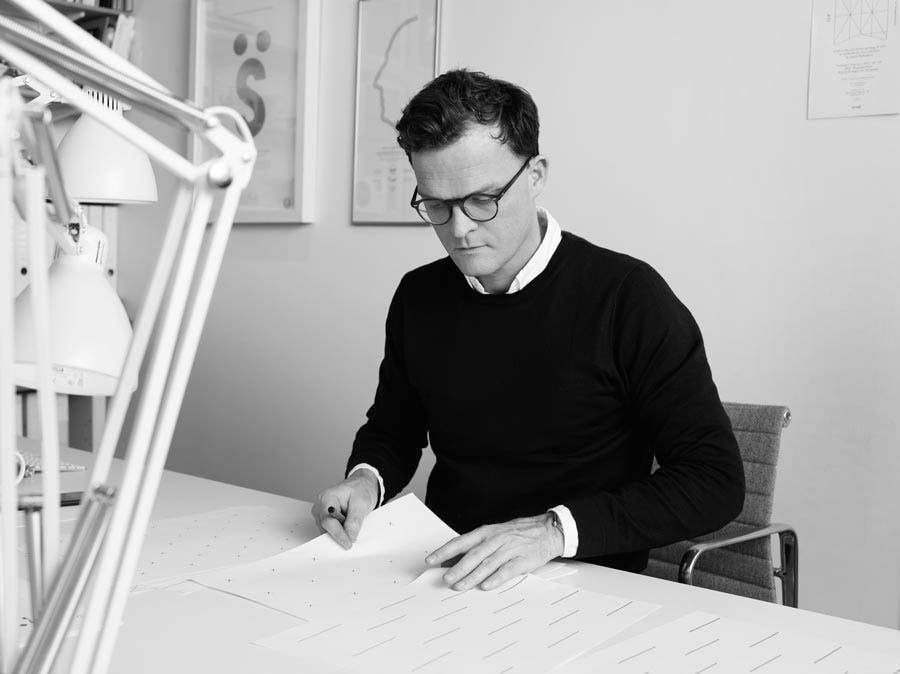 For this collection Andreas took inspiration from old techniques. It was a must for the presence of the hand to be seen. All motifs were painted by hand and will be printed digitally in Photowall’s studio in Skarpnäck, Stockhom.

"I have long been fascinated by hand prints and their capacity and ability to create things. Whereas the digital is often related to technology, the hand is closely associated with the body, the mind and nature. The hand was in this case also crucial to head, as we wanted to distinguish the digital printing technology to something more analog." 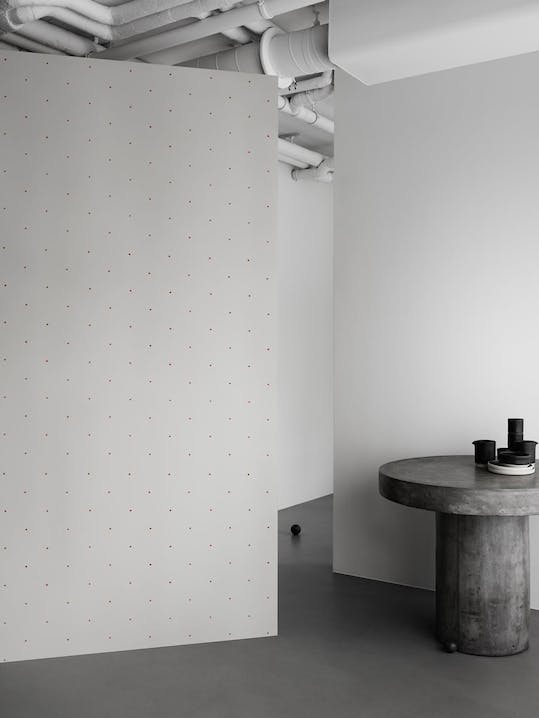 The collection of three motifs which Andreas Engesvik named Rain, Shelter and Berries are all living proof that they where created by the hand. The uneven lines and dots give room for interpretation and reveals that a machine didn’t create them. Looking closely at the motif Rain, you can almost see when Andreas has paused to breathe. But the motifs reflect not only the presence of the hand, but also what and how we see it.

Even if the forms are simple, I want them to revive people’s ability to create associations.

Therefore, someone who looks at the motif Rain might see rain patters hitting the ground, but for others the blue lines might turn to something different, maybe tile joints? 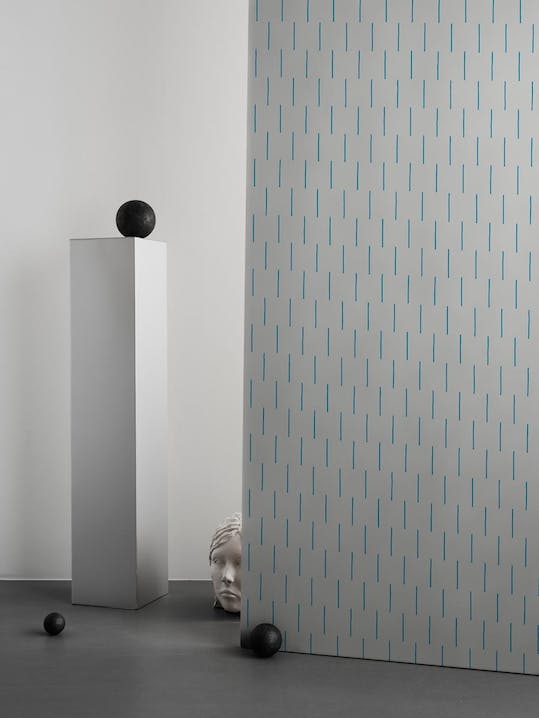 But going back to the first meeting between the design manager and Andreas Engesvik. We asked Andreas what really made him chose to create a wallpaper collection for Photowall?

"Mainly, I believe all home parts are interesting and because I also wanted to work with Amber – Photowall’s design manager," says Andreas Engesvik. 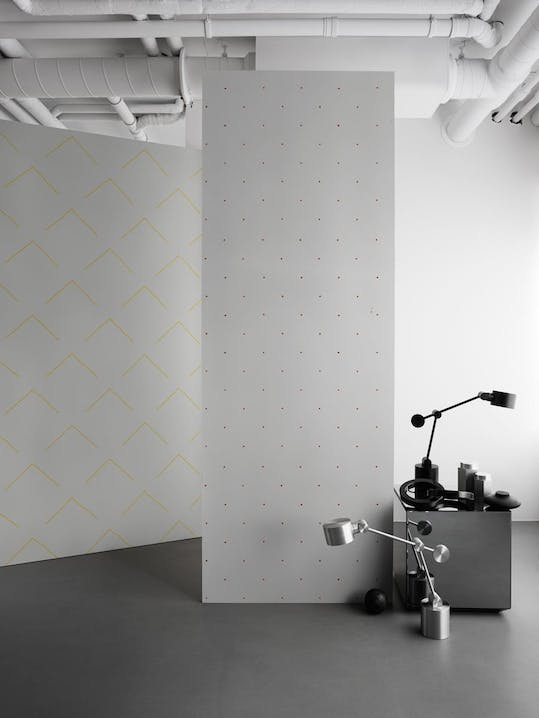 Andreas Engesvik has been a designer for quite some time. After a master’s degree from National College of Art and Design, he started his own company, Norway Says, in 2000. Nine years later he founded the self titled Andreas Engesvik in Oslo, where he currently collaborates with international brands such as Iittala, Muuto and Fogia.

Andreas’ wallpaper collection is available exclusively from Photowall as made-to-measure wallpapers  costing £29 per square metre. The interior photos were styled by AnnaLeena Leino and taken by Kristofer Johnsson. The photos of Andreas is photographed by Siren Lauvdal.