There can be no other feeling like the freedom and speed of snowboarding on a crisp and frosty, sunny day in beautiful snowy countryside. The challenges are challenges that you set yoRead moreurself, reaching further and further, and jumping higher and higher until you attain the pinnacle of your personal success. Our images invoke that feeling of space and light and the canvas prints are unlike any regular painting. Full of brilliant colour, with superb photography, the clarity is stunning and more than enough to ingrain the pull of the sport, and drive one on to achieve these vicarious heights.

Modern snowboarding began in the United States in 1965, with an engineer joining two skis together for his children to surf on. His wife christened it the snurfer, a mix of surfer and snow. He then licensed the product to the Brunswick Corp, who went on to sell a million of them during the next ten years. In the early 70s the engineer, called Poppen, started organising competitions which attracted competitors from all over the country. One of these pioneers, a dedicated skateboarder, designed his own snowboard and crafted it in a school classroom. It was so successful that he produced commercial boards in the mid-70s. In a snurfing competition, he entered a newly designed board. Amidst an outcry over the design of the board, an open division was formed, with one just the one entrant, and thus popular snowboarding was born. However, it was not all plain sailing. Skiers objected to snowboarders performing on what they considered their slopes, and they deemed their sport to be superior. Snowboarders were perceived to be punks, acting and speaking differently than the more cultured skiers. But time and tide have passed, and snowboarding has become a hugely popular activity, with the two factions now accepting each other more easily.

Various styles of snowboarding have been developed, each using specialised techniques and equipment. More common styles include freeride, freestyle and race or freecarve. Although all different in their own ways, clearly there are shared areas between them. Jibbing is snowboarding on alternative surfaces, such as metal rails, benches, ledges, wall, rock and logs, and usually involves performing tricks. Freestyle is defined as any snowboarding that includes tricks, using natural and man-made surfaces. It is extremely popular with urban riders and snowboard resorts. Alpine or freecarving is performed on packed snow or in runs, and very little jumping takes place. It is not as popular as other forms of the sport but certainly tests the ability and agility of the rider. Slopestyle is similar to an obstacle course, where competitors perform tricks over obstacles in a venue using jumps, jibs and boxes. Bridge jumping, featured in the canvas prints, shows how the sport has evolved, using more and more man-made hurdles. Big Air is defined as where riders perform tricks off man-made jumps, aiming as high and as long as possible, and ending with a clean landing. Halfpipe is performed on either a ramp or a semi-circular ditch and includes jumps and tricks both in the air and on the pipe. Freeriding defines itself as riding on any terrain, and down very mountainous peaks. Unseen are the natural dangers, with the fear of avalanches and hidden crevices of soft snow. Many of these disciplines are featured in the canvas print selection, with snowboarders performing mind-boggling jumps and twists through the air. Olympic snowboarding debuted at the Japanese Nagano Games in ’98, with two disciplines, the halfpipe and the giant slalom. It was so successful that it returned four years later, in Salt Lake City, USA. The following Olympics in Turin, Italy, snowboard cross was added, where four riders at a time race across a course of bumps, jumps and turns. At the Sochi Games in Russia in 2014, there were 243 competitors from 31 nations and included two new events, slopestyle and parallel slalom. It was also recognised that year as a Paralympic sport. It is a powerful spectator sport, with thousands turning up to witness the flamboyant spectacle, gasping in excitement and holding their collective breath while witnessing death-defying, dangerous and suspenseful jumps and tricks. This is the feeling one gets when viewing the canvas prints in this collection. Exhilaration is contagious. Catch it.
Show less
Product information
15 motifs
Show:
Sort:
Filter
Done
Show
Done
Sort
Done 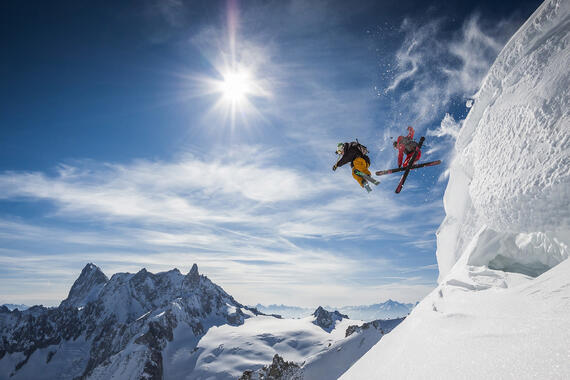 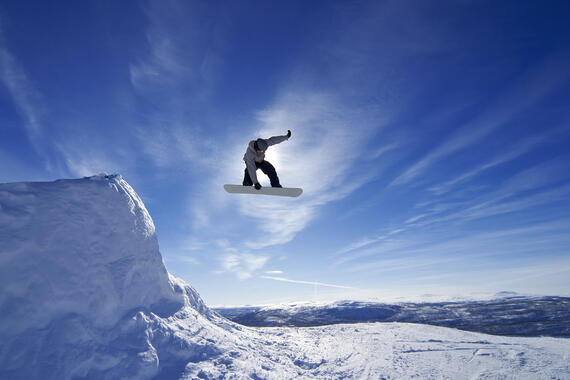 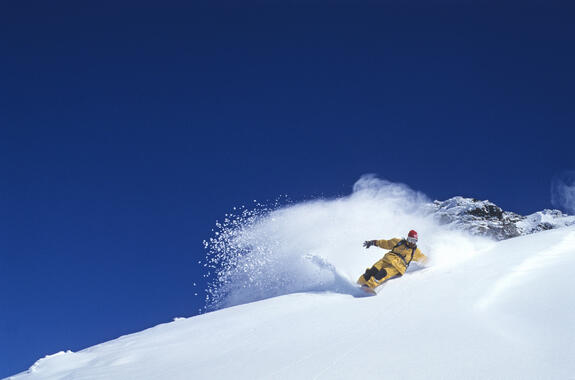 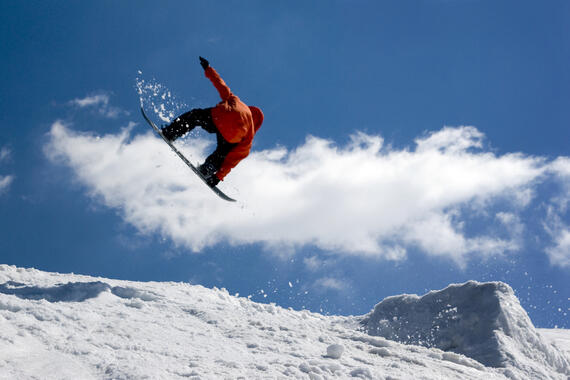 Snowboard Jump from Ramp
- From £38 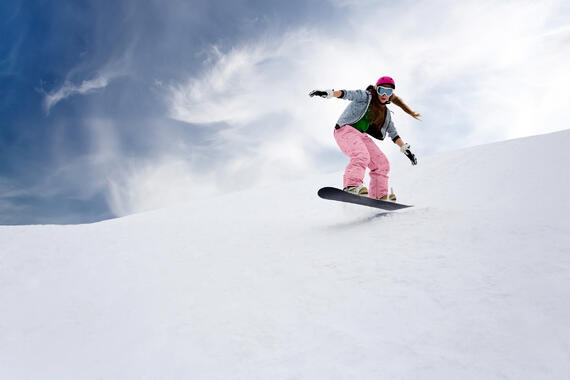 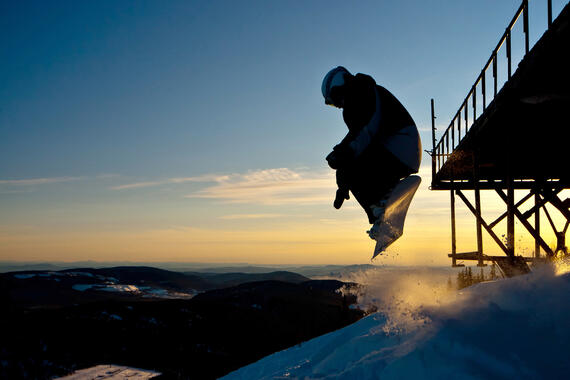 Snowboarder Jump from a Bridge
- From £38 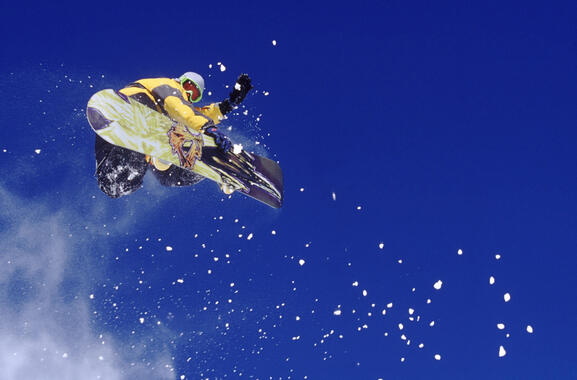 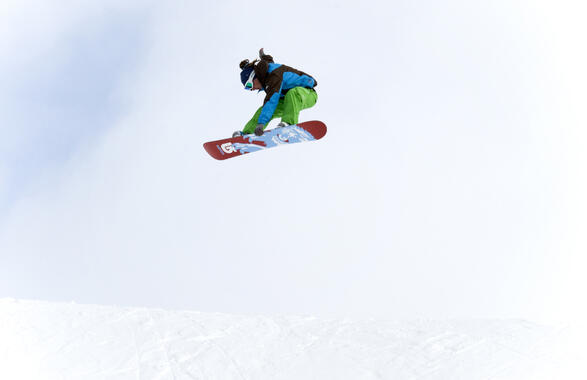 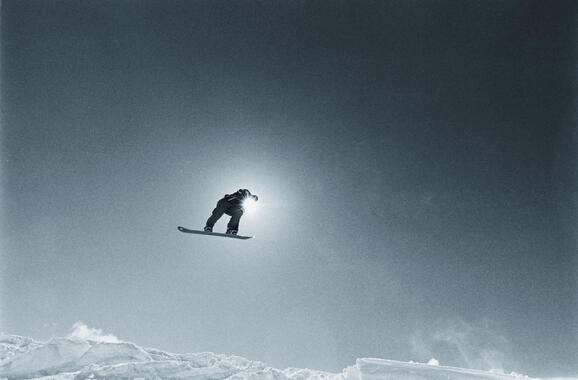 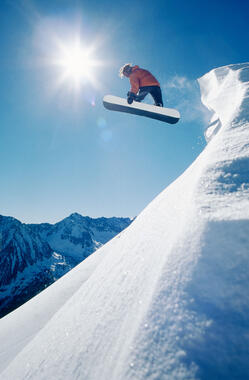 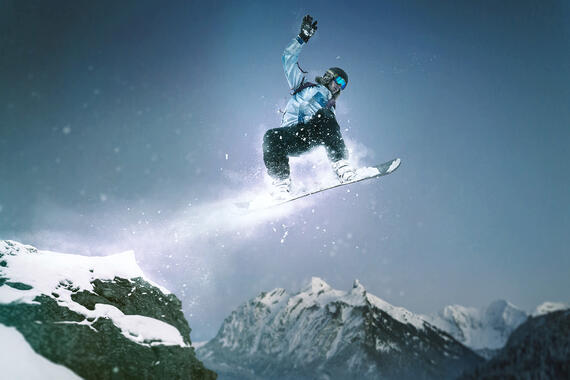 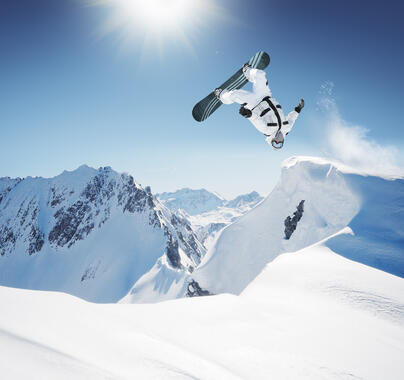 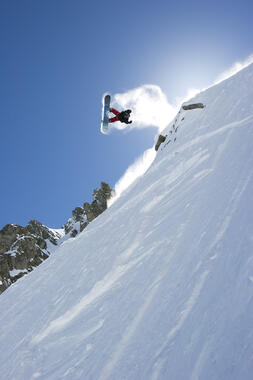 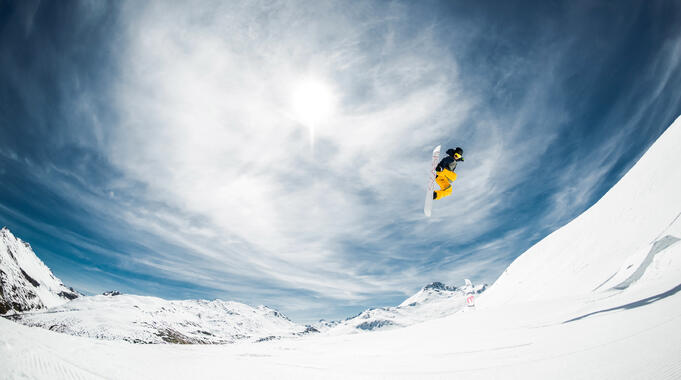 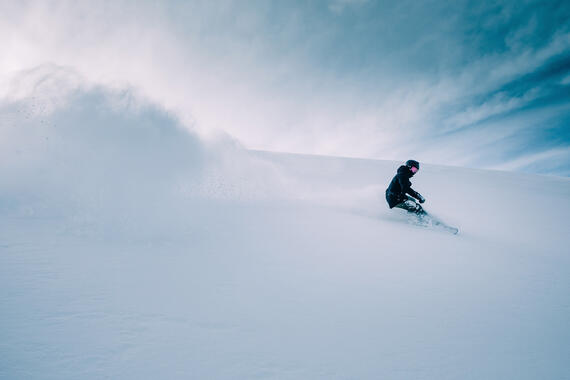