The utilization of the olive branch which is also represented in this sign can have its roots traced back to Greek antiquity. It was believed to symbolize abundance and had the capacity to drive off evil spirits. These traits were assigned to the Greek goddess of peace, Eirene, who was commonly depicted as holding an olive branch. Her visage also appears on several Roman Imperial coins. Photowall gives you the symbol of amiability with “Heart and Hand Painting”, and “Peace and Love” in its amazing collection of peace symbols canvas prints. These images showcase different versions of the peace sign seen in protests and rallies all over the world. Hang a few of these peace symbols canvas prints on the walls of your lounging area, and feel the place instantly imbued with tranquility and serenity. Sit in your favorite chaise lounge with a glass of iced tea as you allow the very sight of these peace symbols canvas prints to ease away all your troubles and cares for the day. You may even want to display these peace symbols canvas prints in your hallways, to make the act of moving from room to room an exercise in tranquility.

The peace symbol was often used in protests when Mississippi gained some notoriety because of some events that happened within its borders during the civil rights struggles in the 60s. The assassination of the outspoken African-American civil rights leader Medgar Evers is an event that will forever mar the reputation of this fine state. As well as the Freedom Summer Murders of 1964, wherein two white and one black young men, who were in Clanton to supervise voter registration among the black community, were murdered and thrown into the swamp, only to be found a few weeks later by agents of the Federal Bureau of Investigation. The Ole Miss riots of 1962 also left an indelible mark on the racial orientations of this state, when white students rallied in protest of the integration of schools. Photowall gives you a bit of the good and the bad with these peace symbols canvas prints. Hang a few of these peace symbols canvas prints in your private study or mini-library, and imagine you are a brave civil rights leader, championing the rights of the racially oppressed. These peace symbols canvas prints can serve as a stark reminder that tolerance is always a virtue that can keep society from falling apart.

The refusal to accept the established status quo is one of the reasons why the peace symbol played such an integral part in the American Civil Rights Movement. Rockstars were often seen joining rallies and protests against racial discrimination and the Vietnam War. While, in the studio, they echoed these very strong sentiments in the songs they recorded. It was a wild and tumultuous time in America, and the peace symbol seemed to be the perfect antidote to it. It was a period of experimentation both with the use of mind-altering drugs and with the sexuality of the youngsters of the age. Women from all walks of life removed and burned their bras in protest against what they believed were outdated misogynistic norms and practices. And the culture was quick to reflect the tumult and emotional conflict prevalent in the age. The world was clearly entering a new era. Photowall pays tribute to some of the most remembered moments in the peace struggle with these amazing peace symbols canvas prints. These peace symbols canvas prints will prove priceless in adorning the homes of rebels of all ages. The mindset and the lifestyle are all encapsulated in the images seen in these wonderful peace symbols canvas prints. There can be no question that having these around your home will cause the heart to become placid and find its proper equilibrium.
Show less
Product information
1 motifs
Show:
Sort:
Filter
Done
Show
Done
Sort
Done 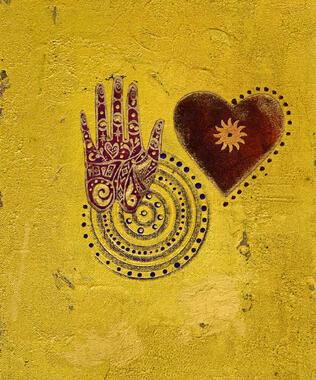 Heart and Hand Painting
- From £38